1. Contents of the Recommendation

The Securities and Exchange Surveillance Commission, today, made a recommendation to the Prime Minister and the Commissioner of the Financial Services Agency that an administrative monetary penalty payment order be issued in regard to market manipulation by Atlantic Trading London Limited pursuant to Article 20(1) of the Act for Establishment of the Financial Services Agency. This recommendation is based on the findings of an investigation into market manipulation, whereby the following violation of laws and ordinances was identified.

2. Summary of the Findings Regarding Violations of Laws and Ordinances

Atlantic Trading London Limited (“ATL”), a proprietary trading firm incorporated in the United Kingdom and registered with Kanto Local Finance Bureau as High Speed Trader, through its traders during the course of their duties, manually engaged in manipulative trading typically known as “spoofing” in 10-year Japanese Government Bond Futures in March 2020 (“Futures”) listed on the Osaka Exchange (“OSE”) for the purpose of inducing others to buy or sell Futures during the period from 8:57:08 a.m. on January 9, 2020 to 1:52:15 p.m. on January 10, 2020 (“Relevant Period”). A summary of the misconduct is shown in Chart.

The acts by ATL described above were found to fall under “conducting a series of purchase and sales of securities, etc.” and “entrusting, etc. a person with conducting such transactions” in violation of Article 159(2)(i) as stipulated under Article 174-2(1) of the Financial Instruments and Exchange Act (“FIEA”).

3. Calculation of the Amount of the Administrative Monetary Penalty

Pursuant to the FIEA, the amount of the administrative monetary penalty applicable to the above violation is a total of 42,850,000 yen. The calculation is shown in Appendix 2.

We appreciate the assistance of the Japan Exchange Regulation in this matter. 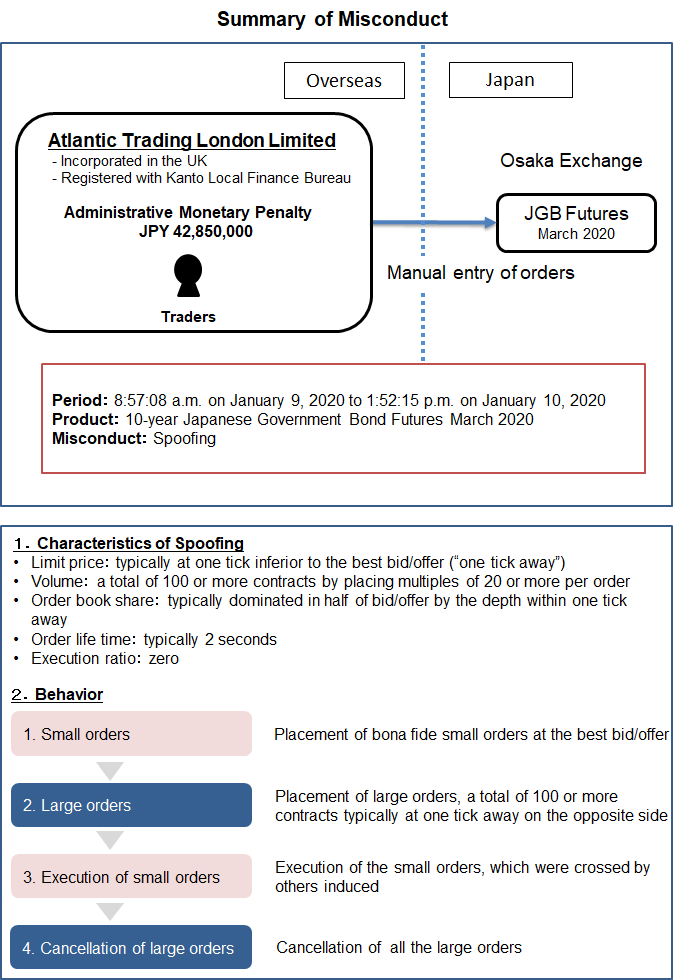 Recommendations to the FSA | top